Analyzing The History Of The Amish Pergola 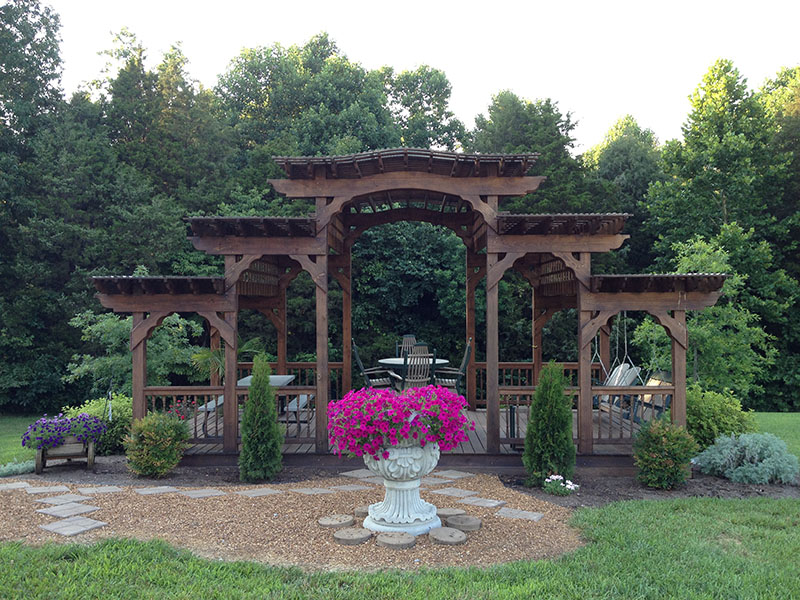 The Amish Pergola has over the years stood the test of time. Though their materials, style and name could have changed, their use has stayed the same for over three thousand years. According to research, the earliest surviving garden plan belonging to an Egyptian high court was detailed by pergola on the entry way to the garden. This dated back to like 1400 BC. It is not clear as to what inspired the creation of pergolas, but most people say it was purely for its aesthetic beauty. Others say it was motivated by weather. However, each person saw it, the truth is, pergolas are able to offer both functions amazingly. This has made them to become a timeless entity until today.

The Origin of Pergola
The name pergola was derived from a Latin word named “pergula”. The name referred to a projecting eve, which was mostly used as an extended arbor or roof. The English term later came to be used in the year 1654, during the medieval period. It was put to use by John Evelyn during the cloister of Trinita dei Monti that took place in Rome. He mentioned the name when he watched coursing hares coming from a “pergola” constructed near Salisbury.

The Amish Pergola through the Ages
The Great Italian Renaissance during the 17th century is the magical period that brought new existence to the pergola. Maybe more because of their beauty than their functionality, the artistic revival phase brought dramatic and large pergolas that were characterized by soft stone pillars. Italians therefore took advantage of this and began to develop lavish gardens using the pergolas. Garden designers also were not left behind. They took this opportunity to epitomize the pergolas on people’s lands to earn some good income. For instance, a renowned artist known as Leon Batista Alberti took his time to design Florence’s Villa Quaracchi and all its gardens. The latter presented at least 3 pergolas in the gardens. Decorated by rounded evergreen branches, beautiful white roses grew in between them making the garden look spectacular.

Egypt
Plants with vines that looked like grapes, trellised up artificial pergola supports in the ancient gardens in Egypt. Fruit trees like pomegranate and figs were used as intertwining branches that covered vaulted walkways. Rich families at times placed gardens on their upper house stories. Here, pergolas became chilled by northern breezes, but still offered sites of the surrounding countryside. They often bordered garden ponds as a means for Egyptians to evade the heat.

France
In the year 1494, Charles VIII of France invaded Italy; little did he know they would come out of Italy with amazing ideas. During their invasion, they realized something new and incredible abut Italy. Italians had many artistic styles that included gardens full of pergolas to beautify them. Soon French nobility started gardening as one way of expressing their creativity. By the sixteenth century, all gardens were named intricate places where people gathered their inspiration. All this attracted higher ranked people too. For example, Italian born Catherine de’Medici, who later became queen, had pergolas crafted at the Jardin de la Reine at the Chaeteau of Fontainebleau. Another person who did the same was Renee of France. She was the daughter of King Louis XII.

Pergolas have over the years served various purposes. They have served as gorgeous hanging gardens for the majestic elites and have also served as functional means for various species coming from harvestable vegetation to grow for a common worker. Pergolas have even provided a good means of vining plants to be able to climb for backyard fanatics. They have served as elegant shade structures that protect all kinds of people from the sun rays harshness or from the fury of a storm. Pergolas have surely come a long way after their creation, and are nowadays used by everyone, not just the rich and the elite.

One thing that has changed is the materials used to craft pergolas nowadays. Modern pergolas are normally not built from the same brick and stone that past generations used to favor. They are nowadays made from materials like fiberglass and vinyl. These materials make beautiful pergolas that last a lifetime and necessitate less or no maintenance. They also make the pergolas stylish and simplistically functional. However, despite the slight change, the technology today has not been lost on previous pergolas. It still maintains the same style and elegance showcased over the centuries.

Advantages of the Amish Pergola
Pergolas have their own advantages if set up right. Some of them include:

– Pergolas create image interest, most especially if one has fragrant vines and flowering vines growing over the rafters and down to the vertical posts.

– Adding pergolas maximizes on ones usable outdoor space by putting up extra furniture that is somewhat sheltered from the elements that could cause harm. This creates shelter and windbreak from rain.

– A distinct benefit to a pergola on a standard patio roof is that one gets to determine the much sun and shade it will offer. One knows where exactly to place the pergola depending on the angle where sunshine comes from.

– A pergola also provides a private area where one can have some business meetings without getting disturbed and while having some good ambiance.

The Future of the Amish Pergola
Since long time ago, pergolas are known to have been used to cover roads, walkways or used as wings to structures. They have also been built as permanent buildings made of rocks, stones and in more present times fiberglass and vinyl. Pergolas have found their origins and home in France, Asia, Greece, and Egypt and have also extended to all corners of the globe. The timeless functionality and simplicity of these pergolas will make sure they get the rightful place in history in many years to come.

Apart from simply putting it in paper, it would be amazing if people came out and embraced them fully. This means taking into practice what is advertised of them. Putting them up is not expensive and it would leave ones home looking lavish and classic.

Limited availability for on-site installs. Call for details. We build to deliver on-site and DIY kits.

This website uses cookies to improve your experience while you navigate through the website. Out of these cookies, the cookies that are categorized as necessary are stored on your browser as they are essential for the working of basic functionalities of the website. We also use third-party cookies that help us analyze and understand how you use this website. These cookies will be stored in your browser only with your consent. You also have the option to opt-out of these cookies. But opting out of some of these cookies may have an effect on your browsing experience.
Necessary Always Enabled
Necessary cookies are absolutely essential for the website to function properly. This category only includes cookies that ensures basic functionalities and security features of the website. These cookies do not store any personal information.
Non-necessary
Any cookies that may not be particularly necessary for the website to function and is used specifically to collect user personal data via analytics, ads, other embedded contents are termed as non-necessary cookies. It is mandatory to procure user consent prior to running these cookies on your website.
SAVE & ACCEPT